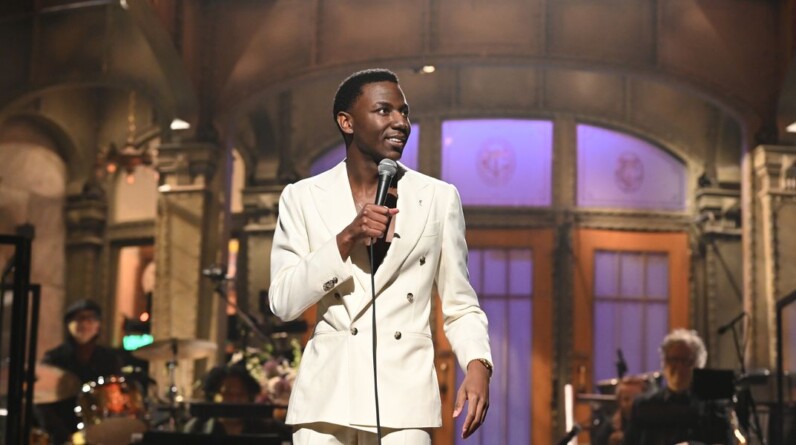 Comedian Jerrod Carmichael is taking on the tricky role of host for the 2023 Golden Globes, after the awards ceremony took a year off due to controversies surrounding inclusion and ethics.

“We’re so excited to have Jerrod Carmichael host the historic 80th Golden Globe Awards,” HFPA president Helen Hoehne said in a statement. “His comedic talents have entertained and thrilled audiences while providing thought-provoking moments that are so important in the times we live. Jerrod is the special kind of talent this show calls for to kick off the awards season.”

Some viewers will certainly be familiar with Carmichael and his work, but for those who aren’t, here’s everything you need to know about the 2023 Golden Globes host:

He moved to Los Angeles when he was 20 years old to pursue stand-up comedy.

Carmichael was born and raised in Winston-Salem, North Carolina. In 2007, when he was 20, he moved to Los Angeles, and soon made a name for himself in the L.A. comedy scene.

He broke through in 2014 in Seth Rogen’s Neighbors.

Seven years after he started working in Hollywood, he finally had his breakout role: as Garf, a member of Delta Psi Beta. The same year, he released his first stand-up special on HBO, Love at the Store, directed by Spike Lee.

His show, The Carmichael Show, was semi-autobiographical and aired on NBC for three seasons. (You can watch it on Peacock.)

In Rothaniel, Carmichael came out as gay.

His second special, 8, also aired on HBO, directed by Bo Burnham in 2017, and in 2019, his two-part video diary Home Videos and Sermon On The Mount premiered on HBO.

It was his third special, Rothaniel (2022)—also directed by Burnham—that made the most waves.

After telling a story about his father cheating on his mother, he says, “After that was out in the open, I was left alone feeling like a liar, because I had a secret. One that I kept from my father, my mother, my family, my friends, and you. Professionally, personally. And the secret is that I’m gay.”